Knowledge of number skills is extremely valuable for us to perform many activities of our daily lives. We use them so often that it appears as though they have always existed. Have you ever wondered

Let’s try to find answers to some of these questions.

Indeed, counting is a pretty old. The numbers we know now have been in use for a long time. But how do we know that? Information about past times is obtained in a few ways.

Using examining such evidences our scholars and scientists have understood that the modern numbers used in the world have first existed in India. There are a few evidences which show that modern numeral systems evolved from India.

Now we understand how numbers and counting has been an age-old practice in India.

In the Indian (also called Hindu) system of writing numbers there are only ten symbols. For the numbers one to nine the symbols are called Anka (meaning “mark”). The zero symbol is called shunya (meaning “empty”). These ankas (digits) used for all calculations in the world are called “Hindu-Arabic” numbers.

As writing evolved the symbols are used to count and write from shunya to nine. They form the one-digit numbers or Units.

Now we know that we have more things to count, so let’s keep the ten as a group in the tens column and add more digits in the units or ones’ place.

Ascending and Descending Order of Numbers

We have seen that numbers have value based on the place in which they are present. Many times, we come across smallest and greatest of a given set of numbers in our activities.

Ganesha likes to have more modakas. Help Ganesha choose the order of plates.

When we have more than 99 things to count what should we do?

Simple, we start our digits in a new column one place to the left of the anka (digit) in the tens place. A place left to the tens place is called the “hundreds place”.

Now, we show how many hundreds, tens and ones we have in each place respectively. Using this we can write as many numbers as we want now… 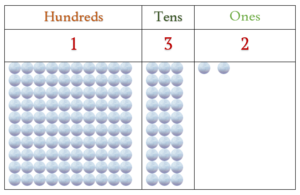 What if we have zero in the tens place?

Order of Numbers (Ascending and Descending) 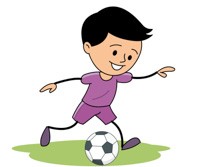 Harish was playing football in his school. He made the following moves with the ball in the field. Count and write the numbers in the squares where the arrow starts and ends. Count according to the spaces moved forward or backwards.

Number Exercise – Identify the ones, and tens place of a number. 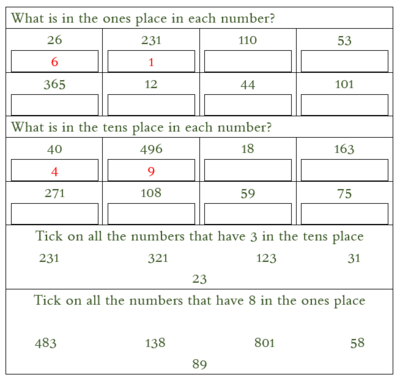 Draw on ground big squares (1 to 30) for pairs of students to play. One student is tagged units and the other tens and both are far apart. Teacher calls out a one- or 2-digit number. Students should instantly identify their units or tens tag and reach those squares within time. When the student group is large pair of students can be assigned specific 1 -10 rows in which the pair has to join when the number is called out.

Choose any three skip countings for a game – 2s, 4s, 3s, 5s, 6s etc before game starts. Draw squares on the ground (1 to 40) marking suns and blackholes on random squares. Game can be played by 2 to 4 students simultaneously. First time display flash cards with any number below 20 and the child stands in that square. Subsequently call out “move by 3” all students in the square move forward by 3. Then say “move by 5” they count from their squares and move to that number. If they encounter a sun they additionally move 4 squares as bonus. If they encounter a black hole they move exactly by 10 backwards.  At least 2 different skip counts may be used in one game and one skip count for bonus.

Count by 2s and color them orange.

Count by 3s and color them yellow.

Count by 5s and color them green.

When even number is called out one student marks the square with that number, Odd number is identified and marked by another student.

Find Surya and Chandra in each row and their meeting point by counting backwards and forwards. Write the numbers and color boxes as shown in the grid starting from 1 ending at 99. This can be a field activity also for children.

Surya and Chandra are represented in each row by S and C.

1.   Identify the number in the grid on which they are located. Example row 1, Surya is on number 4 and Chandra on number 9.

2.   The number by which Surya has to be moved forward is given on the left

3.   The number by which Chandra has to be moved backwards is given on the right.

5.   Repeat this process for each row and find the pattern. 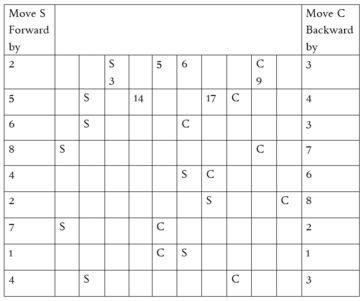