Now that we know the importance of mathematics, let us learn to apply counting and calculations in our daily lives. First, we shall recall the numbers learnt till now and practice writing numbers.

See the end of this chapter for more practice sheets.

Number Exercise: Partitioning a 2-digit number (20 to 99) An introduction to place-value system.

Draw a line around 10 items and write the remaining numbers as shown in the example.

Write each number identifying the number of groups of 10s 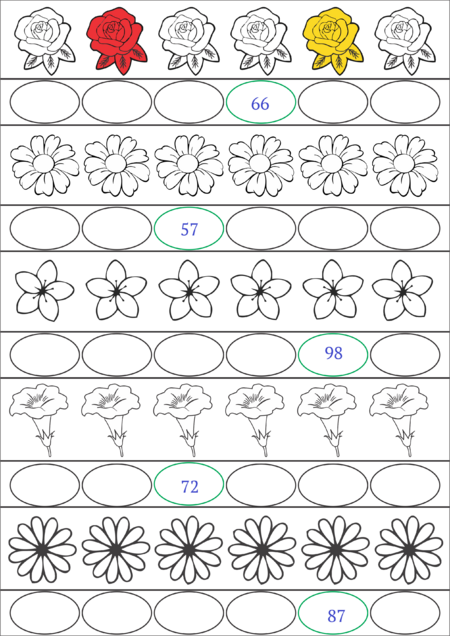 Count by 3 and circle the numbers starting from 1. Join the circled numbers. Colour the picture yellow. 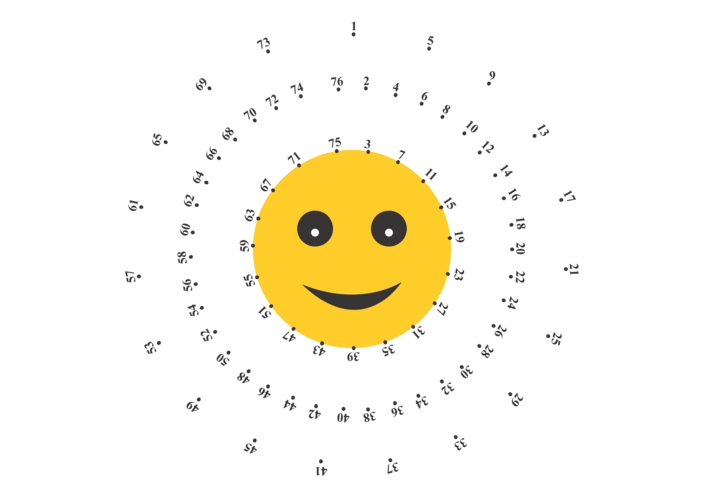 Activity: How many of a Total

Number Exercise: Knowing how many in a total number.

Color as many things to match the number given in the box and write the total number on the line given below.

A cardinal number defines how many (number) of something are present. Example, my friend's house is 4 (four) houses away from my house. 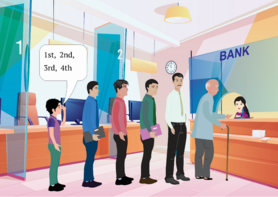 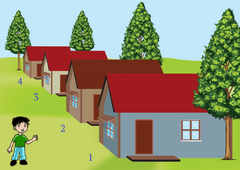 An ordinal number defines where (position) is something located in a list. Example, my friend’s house is the fourth building from my house.

So, if we say there are five persons standing in the line in a bank and the fifth person is wearing a blue shirt, we are 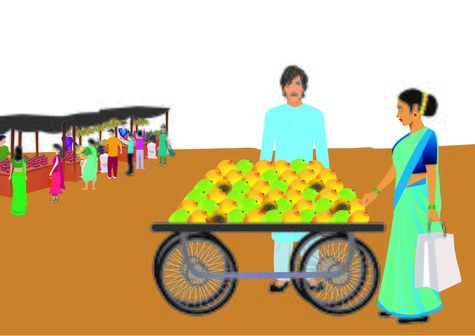 Lakshmi likes sweet mangoes. So, her mother went to the wholesale market to buy mangoes for her to distribute to her friends on her birthday. She knew that ripe mangoes are yellow in color and they are sweet. Lakshmi’s mother wanted to make some mango pickle so she chose unripe mangoes from the carts. From the top row tell the number and position of the ripe and unripe mangoes.

Odd and Even Numbers 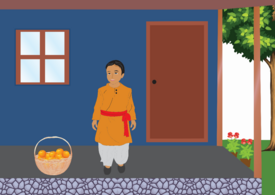 Let’s talk about sharing now. Rama visited an orange farm when he went to his grandparents’ home. He brought 15 oranges home. And he wondered what he would do with so many oranges…

Don’t we all share with whom we care for.

If Rama equally shared the oranges he had into two baskets...

Rama split _____________ out of 15 oranges into two baskets of each and had __________ remaining with him which could not be shared with both his friends. He wondered why he could not share 15 oranges completely. However, he happily shared the rest and ate the one orange himself.

Then he gave the two baskets to his friends and asked his teacher about his activity. The teacher called all the class students. He asked each student what things they had more in number that could be shared with others. 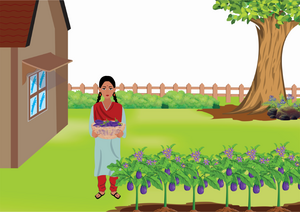 Latha replied that they grew vegetables in their backyard and had grown many brinjal plants.

She had _______________ brinjals. The teacher then asked her to place one brinjal each into two heaps. She placed the brinjals in the following manner.

She did not have anything left after making two equal groups of brinjals.

The teacher informed that, any

Activity: Identifying even and odd numbers

Identify looking at the number and write if it is even or odd, strike out as you write. Place only even numbers in one box and odd into another box.

Number Exercise: Counting by 2 for even and odd numbers. 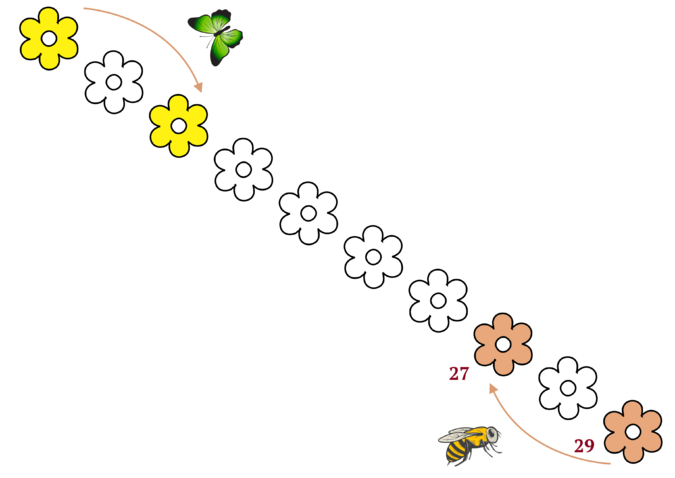 We saw that Rama had 15 oranges and that he wanted to share them such that both his friends get same number of oranges.

What is neither more not less is said to be equal in mathematical terms. It is said to be same. It is represented by the equal symbol =

It requires that two things are measured or compared before saying that they are “more” or “less” or “equal”. In mathematics, they are represented as shown below

Comparison can be between anything same or different. In our example we saw that Rama and Latha had different things namely, oranges and brinjals being compared for their number. We can compare many things for their sameness or differentness.

Write the comparison sign between two numbers. Remember the following

Find the missing numbers. An example is given in each section of the table.

We can write whole numbers (and other kinds of numbers) on a horizontal straight line with numbers placed at equal intervals along its length infinitely extending on both sides. The numbers increase as we move from left to right and decrease as we move towards the right side. A number line can be made with numbers with a pattern, for example, a series of numbers differing by 3 can be written on the number line. It helps us compare numbers visually.

We can see that the numbers are increasing by 1 as we go along the number line.

Number Exercise: Introduction to number-line. Use a number line (visual of skip counting by 3) to mark the events.

A. Krishna was taken to Nanda's house in Gokula as soon as he was born. (represented as red dot on the number line)

B. When he was less than a month old, Putana the rakshasi, tried to poison him. (represented as red dot on the number line)

C. About the time of his first birthday, Krishna was carried up by Trinavarta, an other rakshasa.

D. Krishna was about five years old when he released Nalakubara and Manigriva from a curse. 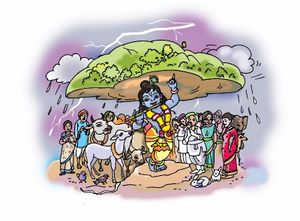 E. He was seven years old when he lifted the Govardhana mountain to protect the people of Brindavan from the wrath of Indra. 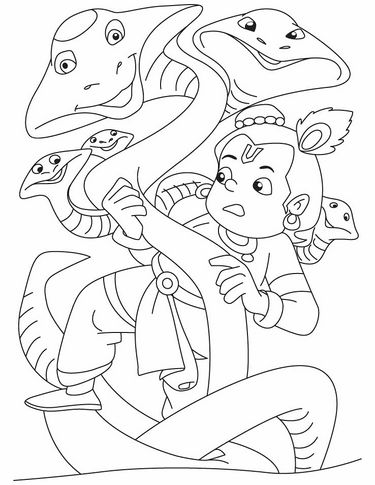 F. At nine years of age Krishna danced on the hood of Kaliya, the snake.

G. At the age of eleven he killed Kamsa and had the upanayana samskara.

H. By the age of twenty, he destroyed Jarasandha's army and Kalayavana asura.

I. Krishna brought back the Syamantaka mani and married Satyabhama at the age of thirty years.

On the number line place a red point noting each age of Krishna's activities and answer the questions given below. Note that 0, 3 up to 30 (skip count by 3) are given on the number line.

Till now we have seen that numbers have

Now, in the early centuries in India, as mathematical system was evolving, our scholars developed a method of expressing numbers as words. They came up with Sankhya samjna (सङ्ख्यासंज्ञा), as mentioned in Ganitasaarasangraha[1] or "word numerals". They arranged them just as we see in the place-value notation.

These word numerals are expressed by names of things, beings or concepts, naturally or in accordance with the terms in Shastras. Thus, the number “one” is expressed by anything that is markedly unique such as the moon, earth etc and zero is expressed by words meaning sky, empty, complete etc. This system of representing numbers using words is called Bhutasankhya system. The word “Bhutasankhya” is a compound word. It is made up of the words bhuta and sankhya. 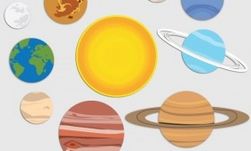 In the Bhutasankhya system, numbers are represented using common words such as:

Thus, the Bhutasamkhya refers to the collection of set of ‘things’ denoted by that number. Our ancient mathematicians used these terms in their shlokas to mention the number they had in mind. Some numbers have multiple representations, such as

Number Exercise: Identify the number given in the Bhutasankhya (word numerals) 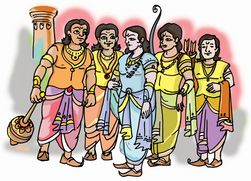 Find the even or odd numbers between the two numbers given

Identify and write the Bhutasankhya between two numbers given below

Compare the numbers and write less than or more than or equal to symbols.

Cardinal and Ordinal Number Chart (1 to 50)

See and learn to write numbers in Samskrit. Fill the charts with numbers in English (cardinal and ordinal)

Cardinal and Ordinal Number Chart (51 to 70)