Theories about the Origin and Propagation of Sound (Samskrit: शब्दोत्पत्तिः प्रसारश्च) have well been discussed in many ancient texts of Bharatavarsha.

Many scholars view that production of sound is a psychological and biological process, others opine that it also involves spiritual aspects. Brahmakanda of Vakyapadiya by Bhartrhari summarizes the ideas of different systemists regarding the basic component of शब्दः[2]

अणुs (plural अणवः) refers to Shabdatanmatras (शब्दतन्मात्रs of सांख्यदर्शनम्), rather than Paramanus of Nyaya-Vaiseshika system. The basic components of पञ्चभूतानि (Five Elements) are called  तन्मात्र-s. Maharshi Kanada explains about the characteristics of various things in the world (padarthas) in his Vaiseshika Sutras. While explaining that sound is something that is heard, he identifies the various ways in which sound is produced and concept of Sound arising from Sound, which is one of the fundamental aspects of modern physics, as follows

Language is born, when a living being desires to express himself. It is that fire that is lit by the coming together of anubhava or experience and vivakshaa or a desire to express.[6] 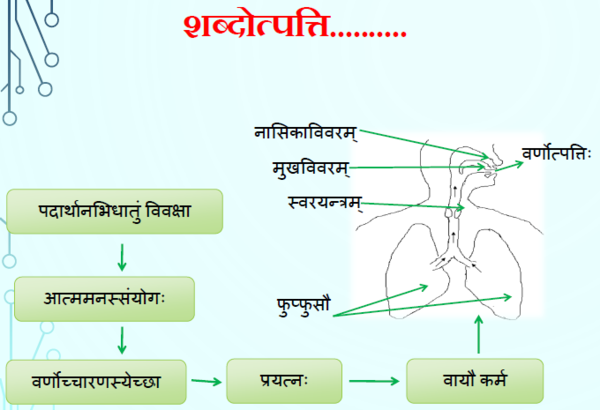 Thus Atman, Buddhi, Maruta and Articulators are considered to be the prerequisites for speech production.

वर्णोच्चारणस्थानानि or the Places of articulation of various sounds are eight were determined as follows.[8]

Similar to Maharshi Panini in his Shiksha, Mimamsakaras also agree that Vayu (वायुः) touches the speech organs thus producing different Varnas (वर्णाः) similar to the process outlined above. Shabara (शबरस्वामी), in his bhashyam for the Mimamsa sutra given below outlines similar process.

Vakyapadiya further explains the process of शब्दोत्पत्ति as opined by Panini and Patanjali Maharshis in the following way.

The Jivatma (जीवात्मा) who is in the form of a minute Vak (वाक्), wishes to reveal his form (express himself) and turns into gross (audible) sound (स्थूलशब्द) due to the touch of the speech organs by the प्राणवायु activated by the effort born out of desire to express (विवक्षा). Shabda which exists in the beginning gets divided into Vak (वाक्) and Manas (मनस्). The latter turns into Vrtti (वृत्ति) which is called Jnana (ज्ञानम्). Since मनस् is the resort of ज्ञानम् it is referred to as Jnata (ज्ञाता), the one who knows. Since Jivatma (जीवात्मा) is the knower inside us it is referred to as आन्तरः ज्ञाता। Thus the fundamental state is very minute.[2]

It is important to note that Vayu though present elsewhere in the body does not play a role in the phenomenon of shabdotpatti; as such, the outside वायु does not have this process, although it touches the speech organs, without the stimulation of Manas, शब्द is not produced.

The Manas when it desires to express its Bhava (भाव) to others, turns (विवर्त) its subtle form (सूक्ष्मरूप) into gross form (स्थूलशब्दरूप). The heat present in the body is the instrument in the process. Vaiyakaranas believe that शब्दः is चेतन (having life). Clearly Vak is a complex process and not just a physiological process as deemed by many people.[2] 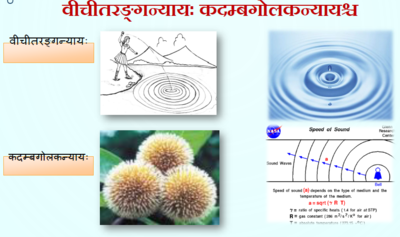 According to the concept of Ripple wave effect (वीचीतरङ्गन्यायम् an anology for longitudinal waves) sound travels in a wave pattern by creating ripples in the medium just like circular waves in a lake which are generated and travel outward in all directions, from the spot where the stone was dropped. One may note the time lapse between the first wave generated and the last wave that reaches the shore before it disappears. According to the concept of unfolding of Kadamba bud (कदम्बमुकुलन्यायम् an analogy for transverse waves) at one instance, sound generated will be further produce multiple sound instances at a single point which in turn generate more sound; thus a simultaneous sound production effect is noted.[10]

According to Dr. Sivasenani Nori, Shabarabhashya on the Jaimini Mimamsa sutra (1.1.13) gives a remarkably identical description of production and propagation of sound as that given by text of modern Physics.[11] 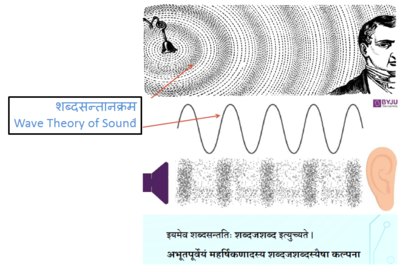 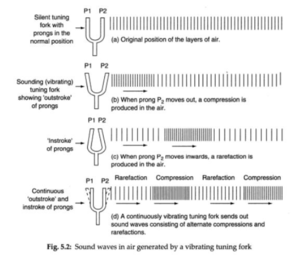