From Dharmawiki
Jump to navigation Jump to search
Share 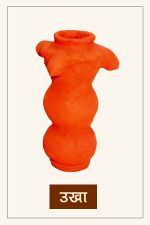 Yajna Upakaranas (Samskrit: यज्ञोपकरणानि) deals with the specialized implements, containers and utensils (upakaranas) used during the conduct of yajnas. A large number of specialized storage vessels, buckets, leather bags for storing liquids, spoons and ladles, mixing vessels, strainer, sieves, grinding stones, mortar and pestle, knives, winnowing baskets, pounders are a few common names of utensils of various types used since ancient times. They are made of metals or wood mostly, as revealed by the archaeological excavations in many sites of India. The ample references of these upakaranas in Vedas are mentioned as required instruments or implements for the performance of yajnas such as Somayaga, Asvamedha yajna and Pashuyajnas which were quite elaborate.

The knowledge of making utensils, instruments and implements for both common and specialized activities of bharatiya jivana vidhana dates back to hoary antiquity. The Rigveda mentions the use of a large number of utensils used during yajnas. Later the Grhya and Shraura vaidika yajnas enshrined in the Sutras employed an enormous number of utensils of rigidly specified design and structure.

It is interesting to note that preparing these vessels or implements would require the knowledge of ganita shastra, geometry, and of metallurgy and alloys which appears to be of advanced nature.

The rites for somayajna were performed three times a day, and employed twelve main vessels for various types of cooking, like sthalipaka, cooking in a pot, and sutagrava, roasting on a spit. The pravargya rite, which is part of the somayajna, required the making each time of a special, round, fired clay vessel with a wide mouth called a mahavira which is heated intensely in the course of the rite.

For the Ajamedha yajna (a pashu yajna) where a goat is given as an offering, a special clay cauldron called the gharma had to be made for cooking the meat.

The asvamedha yajna where a horse is offered in yajna, also called for a huge square clay cauldron termed the ukha for cooking the flesh, and hollow metal skewers for roasting certain organs after their dissection.

In contrast to the potter’s wheel that was in use to turn clay in the Indus Valley, these large clay vessels had all to be kneaded by hand to exacting schedules using certain special clays (e.g. from an ant-hill, or from a place snouted open by varaha). The purodasa cake of rice or barley flour to be baked in a flat clay vessel with a specific number of hollows of various shapes for different purposes.

Many objects from these Vedic times, such as chulli, darvi, grahani, shula are instantly recognisable as being in use even today.

Not surprisingly, some of these vessels, like the drona, kumbha, halasa, ghata, sarava and sthali later became volume measures.

Fire was raised by friction between pieces of wood, and a perpetual fire was kept going in pots called kumpatti. Into this was poked a stick called sulundu, sometimes tipped with sulphur.