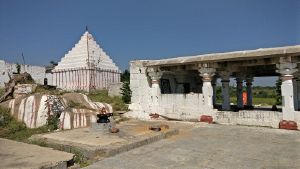 Kṣhetra Purāṇam: Long, long time ago, in kṛtayugam, there lived a great maharshi by name Purupuṇyar and his wife Satyavati. Once they performed the great Putrakāmeṣhṭhi (Śāli) yāgam, at the end of which Lord Vishnu appeared before them and gave a boon that they will be blessed with a child and he should be named Śālihotra. In young age itself Śālihotra was a great bhakta of Vishnu. Once he was old enough, he set out for a pilgrimage. On one great day he reached Tiruvallur and before Swami darshan took a holy dip in Hṛtpāpanāśini pushkariṇi. This pushkariṇi is so great that as soon as he took a holy dip, he decided to perform a penance for the Lord. After two years of severe penance, on the last day of penance he made prasadam and divided it into three parts. One for the Lord, one for atithi and the remaining for himself. The lord in the form of an old man then came and Śālihotra happily offered him prasadam. After eating it he asked if he can lie down for which Śālihotra readily agreed and the old man lied down putting his head towards south and legs towards north and facing east. Then the Lord took his real form and Śālihotra prasied the Lord in thousands of ways. Impressed by the Bhakti of the maharshi, the Lord asked his wish for which Śālihotra asked for Mokṣham and also requested the Lord to stay in this form and bless the bhaktas. This form of the Lord sleeping is what is presently worshipped as Vaidya Vīra Rāghava Swāmi.

Here is a shlokam from Saraswati sahasram starting with the maharshi’s name:

There is an interesting story about the consort of the Lord, Shri Vasumati Devi too. Vasumati, the avatar of Lakshmi, was the daughter of King Dharmasena who belonged to the lineage of the great king Dilipa. Vasumati was a great bhakta of Vishnu and always dreamed of marrying Him. Once lord took the form of a prince (Lord Rama) and appeared before Her with a proposal for marriage. Dharmasena agreed to it and the holy marriage happened. As per the tradition, the new couple were taken to the Tiruvallur temple and there before everyone, the Lord submerged into the idol and blessed that He will henceforth be known as Veera Raaghava Svami and His consort Vasumati will be known by the name Kanakavalli and the Dharmasena couple will attain moksham.

Mahātmyam: The temple is one (93rd) of the 108 Vaishnava divya deshams. This is a rare kshetram in which Lord Rama appears in a sleeping position. The bhaktas offer a mixture of salt and pepper to the Lord and get blessed with good health. The temple has a big pushkarini and is aptly named Hṛtpāpanāśini. Bhaktas who take a holy dip in the pushkarini are relieved of all paapas including those done through the manas and also gain good health. It is here that the vedas were releaved to Lord Brahma by Mahavishnu. Lord Shiva cleansed His brahma-hatya-paapam (of killing Daksha) by worshipping this Lord only. Very uniquely, the only vastram used for the Lord is a simple red-white checked lungi. The other name for Tiruvallur is Vīkṣhvāraṇya Puram. Narasimha swami gives darshan in two forms here — Lakshmi Narasimha and Ugra Narasimha. One cannot directly see and withstand the Ugram of Ugra Narasimha, so the idol is turned back facing a mirror, through which bhaktas can see Him and in the front, the Lord gives darshan as Sudarshana-murti. There is a huge Yajña Śāla in which every day, Yajñams are performed and it is believed that whoever sees the Agni here will be liberated from the cycle of birth-death!

Other Main Deities: Kanakavalli tāyār or Vasumati (consort of the Lord, ~4ft tall idol), Lakshmi Narasimha and Sudarshana murty (with Ugra-Narasimha idol at the back), Andal. Shri Rama, Venugopala swami.

Structure & Sculpture: The temple in its present form (though existant from krtayuga) was built with rich sculptures by the Chola kings. It is in a big area with a 5-leveled Rājagopuram and 7 kalaśams on it. The main deity is sleeping on a 5-headed Ādi Śesha. Here Lord Vishnu is with dvibhujam only with one hand taking support of Śālihotra maharshi. The name of the Vimānam is Vijayakoti Vimānam. There is 30-pillared mukha-maṇḍapam with tall idols of Dvārapālakas. Towards the south, there is a vast Kalyāṇa-maṇḍapam with several pillars and rich sculptures. . There are many śilpas and śāsanas on the borders of the pushkarini, including those on which excellent sāhityam is inscribed.