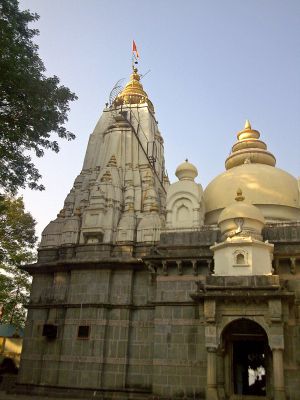 Ancient Devi temple where the main deities are Vajreshvari Devi, Kalika Devi and Resnuka Devi, it is located in Thane, Mumbai.

Kṣhetra Purāṇam: This is an very ancient temple from times unknown. Since the main deities are Vajreśvarī Devi, KālikāDevi and Renukā Devi, the sthalapurāṇam describes stories related to all three of them. Firstly, regarding Vajreśvarī Devi: A rākṣhasa by name Kalikāla used to trouble the mahaṛṣhis, munis and used to destroy their yajñas. They together, with Indra-adi devatas, pleaded Parvati Devi to rescue them from the terrible rākṣhasa and got Her blessing. In the war between Devatas and the rākṣhasa, Kalikāla swallowed all weapons thrown at him. He even broke the Vajra-ayudham of Indra. Then from the Vajra-ayudham emerged the Goddess and slayed Kalikāla. Hence the Goddess was called by the name Vajreśvarī. The story behind Kalikadevi needs no introduction. The Goddess Renuka devi (Yellamma, the mother of Parasurama) appears here because of the close connection of this region to Parasurama: according to the Puranas, this region was blessed by the visits of various incarnations of Lord Mahavishnu. Parasurama, one of the 10 main incarnations of Lord Vishnu, performed many Yajnas here and the mountains in this region are believed to be the Yajna-bhasmam!

The original temple at Gunj was destroyed by the Portugese and was reconstructed in the present place by Peshwa Bajirao I, in 1739, by the encouragement of his brother and senāpati Chimaji Appa. After the invasion of the Portugese, the Vasai fort was under the control of them. Bajirao, with the help of Chimaji fought a war for releasing Vasai from the clutches of the Portugese. However, even after a fierce three year war they were not able to win over the Portugese. Chimaji appa then prayed to the Goddess Vajreśvarī and took a vow that if they defeat the Portugese and free the motherland, then he would re-construct the temple. The Goddess pleased by the Bhakti of Chimaji, appeared in his dream and revealed him the way to conquer the Vasai fort. On 16 May 1739, Chimaji won the battle and released Vasai fort. As per his vow, he immediately got the Vajreśvarī temple reconstructed.

About the Temple: The temple is mid-way on a hill with 52 steps leading to the temple. On the 27th step from the top, is a Golden Kurmam worshipped as the Kurma-avatar of Lord Vishnu. The temple is surrounded by a fort-like stone wall. The main entrance resembles a Nagarkhana and the main temple has three sections: the garbha-grha, grha with dome shaped top and a pillared mandapam. The deities in the garbha-grha are: Vajreśvarī Devi, saffrom coloured murti with khadgam, gada and trisulam; to the left are Renuka Devi (Yellamma) with khadgam and padmam; Saptashrngi Devi; and Vyaghram (tiger, vahanam of Devi). To the right are the murtis are: Kalikadevi with padmam and kamandalam; Lord Parasurama with parsu and dhanus. The second grha with dome-shaped top has the murits of Ganesh, Bhairava, Hanuman and Morbadevi (Devi on peacock vahanam). The pillared mandapam has the murto of Vyaghra vahanam of Devi and Ghanta.

Other Main Deities: There are many Siva lingams and a small shrine of Kapilesvara. There are also shrines of Dattatreya and Hanuman. A peepal tree in front of the Hanuman shrine, has assumed a form of Ganesha and is worshipped as the deity. Further above on the hill is the samadhi of the first pujari of the reconstructed temple Sri Giri Gosavi Godhadebuva.

Near-by Temples: Somesvaralayam is at a walkable distance (1km) from Vajreśvarī temple. It is known by the name Akloli kund and has hot water springs outside the temple. There are around 21 kunds (Surya, Chandra, Agni, Vayu, Sita, Lakshmi, Lakshmana etc.), which are hot water springs, near by this place, which are believed to be the blood of the rākṣhasa killed by the Devi.