Meaning : Oh Agni! Bring the devatas here and seat them in the three designated places. Decorate them and drink somarasa according to the seasons.[5] Pt. Satvalekar in his Rig veda Subodh Bhashya explains the place of Agni in different parts of the body, the head, heart and the lower place of the body being the three important places.[5]

Summary : Oh ! Agni, who invites devatas for the yajna, and pray to them. Agni, who presides over the yajnas, shine forth in the three places (3 lokas according to Pt. Satvalekar).[7]

Summary : The sign of yajna, the earliest priest who brings all the other devatas and seats them along with him, this Agni is kindled by men in three places.[7] 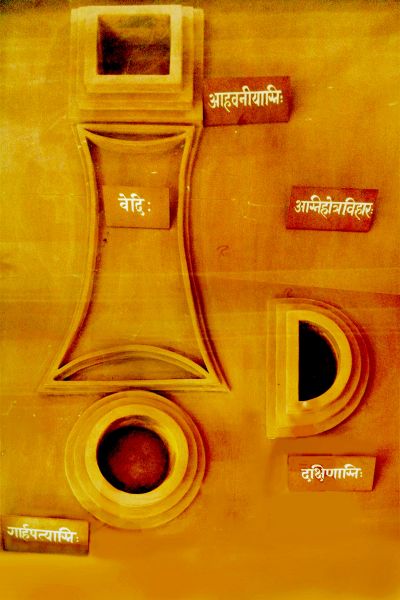 Asvalayana Shrautasutra mentions the following about the three agnis in the context of yajna kunda पर्युक्षण (sprinkling of water). Before kindling of fire in the kundas sprinkling of water should be done by hand.

Meaning : It is to be known that the dakshina fire should be done first, because dakshina fire is the father of all fires, garhapatya is the son and aahvaniya is the grandson. So water पर्युक्षण water should be given in this way.[2] A few important features of the three agnis are summarized below.

Summary: Agni, who fulfills the desires, by presiding over the Garhapatya agni, he guides the yajnas and grants heavenly enjoyments to the yajamana. "Garhapatya" Agni is thus expressly mentioned in Rig Veda.[3]

Meaning : The father is stated to be the Garhapatya fire, the mother the Dakshinagni, the teacher the Ahavaniya fire; these three fires are most venerable.

Meaning : He who does not neglect those three, (even after he has become) a householder, will conquer the three worlds and glows with radiance, enjoying heavenly pleasures.