Devalayam (Samskrit : देवालयः) means 'the temple' as the abode of the deities has been the central axis around which the activities of Sanatana Dharma revolved till the recent centuries. The genius of Bharatavarsha is reflected with greater power nowhere else than in its philosophy, literature, sculpture and the perfect blending of these into the grand scheme of Dharmika Jivana Vidhana. Nowhere except in the architecture of India has it been so divinely captured, with such unbroken continuity, displaying the ageless spirit of Indian Culture reflected in the Temple heritage of India....View More 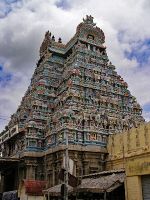 Srirangam, also known as Thiruvarangam is one of the foremost among the 108 Vaishnava temples. It is situated 10kms from Tiruchirapalli district in Tamil Nadu. Here, Vishnu in the form of Sri Ranganatha is seen reclining on the coils of Adisesha. A temple in tamil is called 'koil'. However, among the Vaishnavas, the common noun koil is an invariable reference to the temple of Srirangam. Such is the vital position occupied by this temple within the tradition of Vaishnavism. This temple is also one of the Pancha Ranga kshetras, the other four being, Adirangam (Mysore), Appalarangam (Thiruper), Chaturtharangam (Kumbakonam) and Pancharangam of Indalur/ Mayavaram. ...View More