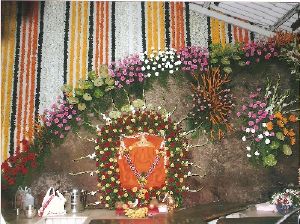 Earlier this place was a hilly area. Contractors blasted rocks and supplied it to the construction sites in nearby areas. One day a worker was digging a huge rock to plant a rock detonator. At noon after having his lunch he decided to take a short nap. In his nap, he dreamed of “Śrī” (lord Ganeśa) asking him not to break the rock as his divine self would be emerging there. The worker narrated this experience to his colleagues. Everyone decided to stop the work of blasting the rocks. Next day they discovered the murti or vigraha on the rocks. The rock on which Lord appeared itself resembles an elephant and the murti or vigraha is located near the eye position. The localities later built the temple. The priests beautifully decorate the rock and murti or vigraha everyday.