Sushruta Samhita, as the name suggests is a Samhita (Compendium or a treatise) written by Acharya Sushruta. This Samhita is regarded as one of the most authentic and standard texts referred for obtaining the knowledge of Ayurveda. It is thus included in बृहत्रयी। Brihatrayee (the greater triology) in Ayurveda. Although it contains discourses on all 8 branches of Ayurveda i.e अष्टाङग आयुर्वेदः । Ashtanga Ayurveda, the main focus of this treatise is on Shalyatantram commonly referred as Surgery. Therefore Sushruta Samhita is also popular as a textbook of Surgery in Ayurveda. Sushruta Samhita is of great historical importance because it contains adhyaya on historically unique topics like surgical training, Surgical instruments and numerous surgical procedures that are practiced, redeveloped in modern world. 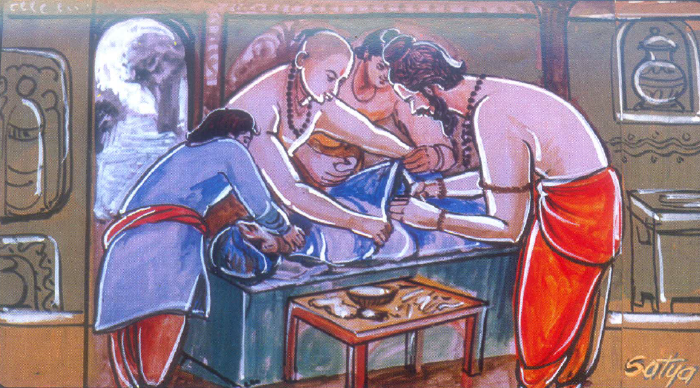 Sushrut Samhita discusses the methods and measures to cure the ailments of diseased individual and preserve the health of a healthy individual. The entire text is scripted in Samskrit Language. It is primarily divided in 2 parts. 1st part is composed of 5 Sthanas and the second part is a separate volume with 1 Sthana added to original Samhita and is called as 'Uttaratantram'. Shalya and Shaarira are the 2 such aspects in Ayurveda that are best covered an elaboraated in Sushruta Samhita. Therefore Sushruta Samhita is said to be the best compendium to study Shaareer.

Shalyatantram is the most discussed topic in Sushruta Samhita. This branch of Shalyatantram found its roots in the war of those times. There was a need to find out the methods and procedures to remove objects like broken arrow heads and weapons from the warriors body. This lead to the development of Shalyatantram which literally means the Tantra (Techniques) to remove the foreign objects from the body. Hence it includes elaboration on various minor and major surgical procedures.

The hierarchy of school of surgery is as follows, Lord Dhanvantari a Supreme Physician and Surgeon mentioned in almost every classical Bharat's text. This Lord Dhanvantari is amongst 14 Precious stones which are the by-product ocean churning by Deva and Asura i.e. Gods and demons. Lord Dhanvantari brought Amrut Kalash a potion of life into his hands the purpose of appearance of lord Dhanvantari health and longevity of life in the Process of Samudra Manthan , Being a celestial after completion of his purpose lord Vishnu grant his wish to be reincarnated on the earth to serve human being with all his knowledge.

He reincarnated as Kashiraj Divodas, according to Garud purana  Divodas is a fourth descent of Dhanvantari also named Dhanvantari because of his forefather.[1]

Sushruta Samhita comprises 6 sections called as 'Sthana'. Further every Sthana is composed of multiple chapters called as 'Adhyayas'. There are total 186 Adhyayas in Sushruta samhita that grouped under various sthanas.

The following table provides brief idea of the overall structure of Sudhruta Samhita.

Every compendium has several contributors era by era, there are four remarkable contributor to Sushrut samhita as follows

When it comes to a name Sushrut there are two persons named Sushrut associated with Sushrut samhita first from Upanishad Kaal and a student of Kashiraj Divodas.  He was From the Race of Vishwamitra This Reference also mentioned in – Mahabharat Anushasana Parva(Adhyay 4th). This also coincides with the description given of him in the present recension of Samhita. This Sushruta also considered as Vriddha Sushrut or Old Sushrut. The second Sushruta. He was from Satvahan Kaal ,He was priest of Satvahan Empire also named as Shalihotra Sushrut this era can be established by following points mentioning of community medicine, medicine for emperor, belief on demons and extra-terrestrials, political view similar to Satvahan Empire all these references are mentioned in the compendium. Nagarjun was from the Kapalik community this community belongs to monks who lived in graveyards use heavy metals processing to convert them into the gold and use them in the medicine related to Rasashastra. Chandrat was the last contributor to this classic texthe completely remoulded the compendium by adding extra section to the compendium as Uttartantra.

Overview of the Samhita-

Sushrut was empathetically surgeon, Sushrut samhita is the only book that deal with problems of Practical surgery and midwifery. Almost all the other Samhita written by Sushrut fellow Students are either lost to us or imperfectly preserved. To Sushrut may be elevating the glory of elevating the art of a lancet to forceps to the status of practical science. It may not be out of place  here to give a short history of Ayurveda as it was practice and understood in pre saushrutic times if only to accentuate the improvements which he introduced in every branch of medical science. In Samhita it discusses blood in terms of the fourth doshic principle. This work is the first to enumerate and discuss the pitta sub-doshas and the marmas(Su.sha 6-33). With its emphasis on pitta, surgery, and blood(su.su14/44), this work best represents the transformational value of life and surgical field.Sir Harold Gillis Pioneer of Modern plastic surgery Quoted Plastic surgery is a race between beauty and Blood supply. The Sushruta Samhita was composed after Charaka Samhita, and except for some topics and their emphasis, both discuss many similar subjects such as General Principles, Pathology, Diagnosis, Anatomy, Sensorial Prognosis, Therapeutics, Pharmaceutics and Toxicology. The Sushruta Samhita, in its extant form, is divided into 186 chapters and contains descriptions of 120 illnesses,700 medicinal plants, 64 preparations from mineral sources and 57 preparations based on animal sources. Crude methods and still cruder implements of incision such as bits of glass, Bamboo skins described in Samhita, Primitive instrumentology(su.su.7/3)  which found favour to ancestor long before humanisation. Sushrut has Knowledge of practical anatomy, Sushrut devoted his whole life to pursuit surgery proper. He was the first to describe and classified different operatives Called as Ashtvidha Shastrakarma. He advised to use models before getting direct into surgery Models-Yogya(su.su.9/4). Vrana(Su.su.21/40) –complete chapter dedicated to wound. Also mentioned about Post-operative care of wound. Fractures-Bhagna(Su.ni15/16) also mentioned very thoroughly and deeply. The Compendium also mentioned about Fluid evacuation from Hydrocele sac(Su.Ni.12/4), Ascites. Intestinal perforation , intussusception , volvulus-twisted intestine Discoloured skin after operative regaining natural tone of skin even hairs too are included in 60 treatments, Bandages of wounds.

Basic surgical principals such as,

Are the classical features of the Samhita which are till date the basic principal of Surgery.

The most popular treatment in ano-rectal diseases Kshar Sutra, it is a medicated thread (seton) coated with herbal Alkaline drugs like Apamarga (Kshar)(Su.su.11/5) (Ash of Achyranthus ascera), Snuhi (Euphorbia nerufolia) latex and Haridra (Curcuma longa) powder in a specific order. This combination of medicines on the thread helps in debridement and lysis of tissues, exerts antifungal, anti-bacterial, and anti-inflammatory. Another mechanism proposed for the Kshara Sutrais that it destroys the residual glands in the epithelium.The whole plastic Surgery in Europe took a new flight when these cunning devises of Bharat's workmen become known to us “Transforming an entire skin flap is also an Bharat's method. It is Sushrut who first successfully demonstrated the feasibility of mending a clipped ear lobe with a patch of sensible skin flap or Scrape from the neck of adjoining part. Of the 76 verities of the ophthalmic diseases amongst them 51 are surgical. The mode of operation which is to be performed in each case has been elaborately described in the Samhita. And does not unfavourably compare in most instances with modern methods of ophthalmic surgeries. Sushrut is attributed the glory of discovering the art of cataract crouching which was unknown to the surgeons of ancient Greece and Egypt. Amputations were freely made. Sushrut does not rest content the mere bursting and opening an abscess and the healing of incidental wound but lays down the process of for major operations as well. The removal of the cicatrices until it becomes the same colour with the surrounding skin and the growth of the hair there on are suggestion which we find nowhere else. It is in the region of practical midwifery that one become so much impressed with the greatness of Sushrut. Different turning, flexing, gliding movement. Applications of the forceps in cases of difficult labour and other obstetric operations involving destruction and mutilation of child evolve in samhita such as craniotomy etc. Mentioned about Fumigation and sterilization technics of Sutika agar- labour room. Marma consists of aggregate of Mamsa, Sira, Snayu, Asthi and Sandhi in which particularly Prana by nature stays. That which leads to death or which gives misery to individual similar to death when injured is called Marma. They are that part of the body which exhibits a peculiar sensation or unusual throbbing and causing pain on pressure. Marmas are so called because they cause death when they are injured and they are meeting place of Mamsa, Asthi, Snayu, Dhamani, Sira, Sandhi and life entirely resides in them.

This was a brief discussion of Sushrut samhita till date this compendium is a mile stone in the field of science of Surgery.