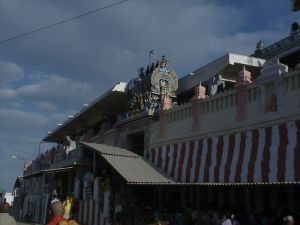 Kṣhetra Purāṇam: Once Tārakāsura stole Lord Vishnu’s Chakra-āyudham and then Lord Subrahmanya slayed the asura, and his younger brother Śūrapadma and returned the Chakram to Shri Hari in Tiruttani. With the killing of Tāraka, Lord Subrahmanya also returned the throne to Devendra. Hence as a token of gratitude, Lord Devendra gave His daughter Devasena to Lord Subrahmanya. Later, Subrahmanya also married Valli (Vallimalai, the Godesses’s birth place, is also near to Tiruttani) and hence the Lord appears here with both His consorts.

This is also the place where Lord Subrahmanya gave upadeśam of Praṇava-mantram to Lord Brahma Himself! Once Nandīśvara (11 avatar of Lord Shiva), performed penance on the banks of a river in Tiruttani. The Lord impressed by it blessed Him with Divya-Jñānam. This river hence is also called by Nandi’s name. Vāsuki, who was used as a rope in kṣhīra-sāgara-mathanam, prayed to Tiruttani Lord and cured his wounds.

Mahātmyam: This is the fourth in the six important Subrahmanya Kshetrams. There is a small pushkarini near the start of the foot-way by the name Brahma-kuṇḍam. A holy dip in which cures even deadly diseases! There is a 4ft stone on which everyday kilos of sandal wood paste for the Lord is prepared. Though this stone is being used since many yugams, owing to its great auṣhadha-śakti, it has not eroded. Hence if the sandal-wood paste used for God is taken, it will cure great diseases. The foot-way to the temple on the hill from the village has 365 steps and many bhaktas offer turmeric and kumkum to each step and thereby achieve the puṇyam of performing archana to the Lord throughout the year (365 days).

About the Temple: Temple is located on a small hill (700ft above sea) with 365 foot steps from village base. There is a small pushpavanam which was constructed by Lord Devendra. This vanam has a divya vruksham which offers exactly three flowers everyday. The Lord is worshipped with them everyday.

Near by Temples: 15 temples in Tiruttani iteself within radius of 15km, Temples in Nagari and in Arakkonam