Shulbasutras (Samskrit: शुल्बसूत्राणि) are manuals for the construction of yajnas. They are sections of the Kalpasutras, associated in particular with the Shrautasutras. Each Shrautasutra seemed to have their own Shulbasutra section based on literary data; however, in the present days, only seven of these sutra works, Baudhayana, Apastamba, Katyayana, Manava, Maitayana, Varaha and Vadhula are available.

Recognized as the oldest and earliest treatises on mathematical problems, Shulbasutras give us a glimpse of the knowledge of geometry that the vedic people possessed. Incidentally they furnish us with a few other subjects of much mathematical interest.[1]

One of the prime occupations of the vedic people, performing yajnas, required altars or yajna-vedis of prescribed shapes and sizes. It was primarily in connection with the construction of altars that problems of geometry and also of arithmetic and algebra presented themselves to these ancient rshis, which led to the development of these texts.

Unlike the other Sutra charanas, there are a very few Shulbasutra texts available at present and all of them belong to Yajurveda. The Shulbasutras of Baudhayana, Apastamba, Katyayana and Manava are the main sources of the knowledge of geometry. The Kalpa texts of Vedangas clearly outline that astronomy on one hand and geometry on the other were cultivated under different circumstances by different rtviks based on the duties apportioned to them in the conduct of yajnas.[2][1]

Of the available extant texts, Baudhayana Shulbasutra is considered to be the most ancient one. Following is the list of shulbasutras and their commentators.

Mahidhara in his commentary on Katyayana shulbasutra succintly describes the qualities of a Shulbakara.[3]

A shulbakara must be versed in arithmetic, versed in mensuration, must be an inquirer, quite knowledgeable in one's own discipline, must be enthusiastic in learning other disciplines, always willing to learn from practicing sculptors and architects... and one who is always industrious.

Besides having the above qualities, Shulbakaras had to perform several other important duties systematically viz.,

The word Shulba (शुल्ब) means a 'cord', 'a rope', 'a string'. A Sutra refers to a short rule. The commentators refer to this subject matter as Shulba as the true name, Shulba-parishista, Shulbi Kriya etc.

In few other instances the word "rajju (रज्जुः) has been used. B. B. Datta states that the words "shulba (शुल्ब)" "shulva (शुल्व)" and "rajju (रज्जुः) may be used synonymously to mean a rope or cord.[1]

The word "shulba or shulva" (sulva) stems from the dhatu "शुल्ब्" used in the meaning "माने । to measure" and hence its etymological significance is "measuring" or act of measurement. The term Shulba can be presented in the following ways[3]

In the Shulbas the measuring tape is called "Rajju", so is "a line". One who is well-versed in the science of Shulba (geometry) is called Shulbavijnana, a Shulbavid (expert in geometry), a Sulbapariprcchaka (an inquirer into the Shulba), a Samkhyaajna (expert in numbers), Parimaanajna (expert in measuring). A special term sama-sutra-niranchaka (meaning uniform rope stretcher) is also used, this rope plays a very significant role and we find many references of similar words rajjuka, rakku-grahaka, sutra-grahaka - all used to denote a maharaja's land surveyor. A sutra-grahaka is further described as an expert in alignment, a rekajna, one who knows "the line".[1]

It is extremely interesting to note that land surveying is an ancient procedure followed by our ancestors.

The existence of numbers, their usage, the decimal system being in vogue, the concept of infinity are unambiguously presented in the following examples.[3]

In the Krshna Yajurveda, Taittriya Aranyaka, interesting passages containing a sequence of ascending numbers appear in the context of offering venerations to Agni (Deity of Fire) as follows

Odd and Even numbers

A list of odd numbers and multiples of four occurs in the Taittriya Samhita (4.7.11)[5]

A mention of an interesting number 3339 is seen in the Rigveda, third mandala

In the Rigveda, second mandala we find multiples of ten listed.

The following widely recited mantra refers to the notion of infinite.

These names of fractions referred in context with bargaining for a price of material (Soma) to be purchased. The price of the material is increased step by step.

Evidence shows that the knowledge of geometry was developed during the vedic period itself. Mantras in Rigveda, for example in Mandala 1 (त्रय: पवयो मधुवाहने रथे । 34.2 and त्रिवन्धुरेण त्रिवृता रथेन त्रिचक्रेण सुवृता । 118.2) there is a mention of three (solid) wheeled, triangular, tricolumnar well-constructed chariot of Ashvini devatas on which they travel. At another instance a wheel formed of hub, spokes and metallic rim are also described. Thus we see that knowledge of construction of drawing concentric circles of desired diameters had developed in the Rigvedic period. The names of Rathakaras that occur in Rigveda are Bhrgu (एवेदिन्द्राय वृषभाय वृष्णे ब्रह्माकर्म भृगवो न रथम् । 4.16.20), Rbhus, Tvastr and others. In Yajurveda the rathakaras are given special importance for their skill.

The knowledge of geometry is also evident from the preparedness to cover wells of different shapes and dimensions.[9]

Yajnas are of two main classes: Nitya (obligatory) and Kamya (optional or performed with a special intent). Nitya yajnas are indispensible and not performing them will incur papam (sin) to the yajamana. The Kamya yajnas are, however, optional and those who do not have any specific aims to achieve any desired objects need not perform them. In this section the knowledge of mathematics, the instruments and units of measurements, the bricks used for construction of the altars - as mentioned in Shulbasutras, are discussed.

Every yajna must be carried out in a Chiti (चितिः) (a fire altar) also called as Vedi, of prescribed shape and size. These sutras give a compilation of principles in geometry that were used in designing the altars where the yajnas were to be performed. The platforms of the altars were built with burnt bricks and mud mortar. It is stated that even a slight irregularity and variation in the form and size of the chiti (Citi) will nullify the object of the whole ritual and may even lead to an adverse effect, accuracy was the key. So ancient adhvaryus took utmost care in building a chiti of right shape and size.[1]

The chitis had rich symbolic significance and their designs were often intricate. For instance, the Syenacit has the shape of a falcon in flight (a symbolic representation of the aspiration of soaring upward); the Kurmachit is shaped as a tortoise, with extended head and legs, the rathacakracit as a chariot wheel with spokes, and so on.[10]

The units of measurement occur commonly in the three vedas themselves; Angula, Gavyuti, Aratni, and Yojana are mentioned in Rigveda, Yojana in Yajurveda and Aratni and Vyama in Atharvaveda. However the length is not clearly mentioned in the samhitas.

It gives us an insight about how our ancients developed units of measurement long before other civilizations mentioned it. However, it should also be remembered that the Shulbasutras of different Sutrakaras have slight variations thus we see versions of the above angula measures. It cannot be more emphasized that later day developments in such areas of ganita are founded on these ancient works.

Baudhayana shulbasutras are considered to be the most ancient of the Shulbasutra texts. It also presents a very systematic and detailed treatment of several topics that are skipped in later texts.

Besides presenting the details related to the construction of altars - that generally possess a bilateral symmetry - the Shulbasutra texts also present different interesting approximations for surds. The motivation for presenting estimates of surds could be traced to the attempts of vedic priests 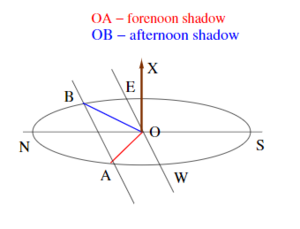 Determining the exact east-west line at a given location is a prerequisite for all constructions, be it a residence, a temple, a vedi or yajna kunda. Finding the cardinal directions using a shanku has been described thus:[3]

Fixing a pin (or gnomon) on levelled ground and drawing a circle with a cord measured by the gnomon, he fixes pins at points on the line of the circumference where the shadow of the tip of the gnomon falls. That gives the east-west line (prachi). Now, to answer the question about the necessity of such an experiment, instead of simply looking at the sunrise or sunset to determine the cardinal directions, the commentator Mahidhara observes:

Meaning: Since the rising points are many, varying from day to day, the (cardinal) east point cannot be known (from the sunrise point). Therefore it has been prescribed that the east be determined by fixing a Shanku (शङ्कु)... therefore simply looking at the sun and determining the east is difficult.

Having obtained the prachi, getting udichi (the north-south line) correctly is extremely important for the construction of various vedis having bilateral symmetry. Two methods have been described for obtaining the perpendicular bisector of a given straight line:[3]

Katyayana Shulbasutra (1.3) describes these methods in detail to determine the north-south line using the shanku. Thus accurate determination of simple geometric figures was perfected using simple tools such as a gnomon and cords.

Construction of a Square

Now from the Shulbasutras, we learn that the altar of Garhapatya agni should be in the form of a square, according to one school and a circle according to a different school. The altar for the Ahavaniya agni should always be square and that of the Dakshinagni semi-circular. The area of each, however, must be the same and equal to one square vyaama (1 vyaama = 96 angulis). So the construction of these three altars, as evident, pre-supposes the knowledge of the following geometrical operations: