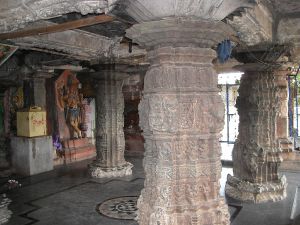 Ancient Shivalayam, one of the architectural heritage temples, Kashi Vishveshvara devasthanam is located in Medak District of Telangana. Also a Vaishnava temple, it is a hallmark temple for Advaita siddhanta. 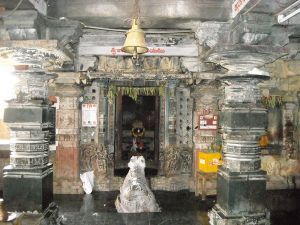 Details of the Temple: This temple was built in 11th century by Ontimitta Obalayya, the Army commander of Kakatiya king, Prataparudra. The sculpture and architecture of this temple are really outstanding. One gets reminded of the 1000 pillar temple in Warangal on seeing this glorious temple. Just in front of the garbhalayam, there is a mandapam for a huge Nandi. This mandapam also has nicely carved pillars. 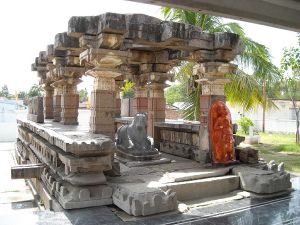 On the south side (left while facing the temple) resides Kashi Vishweshara in a great Linga form. In the front (West side) is Anatha Padmanabha swamy in Yoga-nidra on Sesha, performing in-interrupted Shiva-abhishekam. Various our dieties like Lakshmi, Brahma, Dikpalakas, Dashavatarams give darshan along with PadmanabhaSwamy. On the North side (right) Rukmini-Satyabhama-sahita-VenuGopala Swamy resides. He gives darshan with shankham and chakram.

When sunrays touch the murti of PadmanabhaSwamy, the entire temple glows with light! Ganga (Manjeera) flows beneath the Shiva Lingam into the nearby sacred Pushkarini of the Temple.