Kṣhetra Purāṇam: This is the place where the Lord was married to Śrī Padmāvatī Devi, who is the daughter of King Ākāśarāja and avatār of Goddess Lakṣhmi. This temple was constructed by the brother-in-law of the Lord in commemoration of the divine marriage. 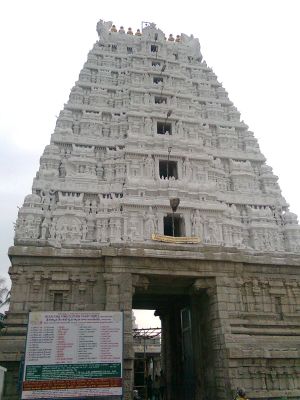 About the Temple: The Lord appears here with a contradicting alaṅkāram:  He has a Khaḍgam, as He came here for mrgayā-vihāram, and also simultaneously has a Kalyāṇa Rakṣhā-bandhanam, as He got married to the Goddess here. The temple has many antique artifacts which were used during the divine marriage: e.g., a stone used to grind turmeric etc. Nārāyaṇa Vanam was the capital of the king Ākāśarāja and hence has many Temples near-by which were patronized by him. This temple is currently maintained by TTD.

Near by Temples: Temples in and around Nagari and other temples in Narayana Vanam.