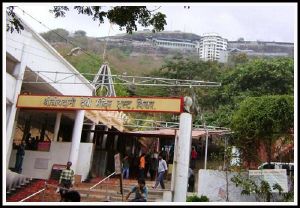 Kṣhetra Purāṇam: Once Pāndavas, during tīrtha yātra, came to the banks of vaitariṇī river, which even today flows near this sacred place. On the banks of this river and near Tungareśvar hill, they worshipped Ekavīra Devī. (This ancient temple of Ekavīra Devī was destroyed by Moghuls and Portugese and now one can only see remains of this destruction). Inspired by the Devī, they then worshipped Her in the mountain caves near by in the form of invisible Goddess by the name Jīvadhani Mātā. Even today, one can see a small passage just beside the newly consecrated murti or vigraha, where the Goddess resides in invisible form.

Till the advent of kaliyuga and Buddhism, this sacred place was visited by many yogīs and thereafter was forgotten. Infact, many ancient temples and caves around vasai were destroyed by the portugese. To a large extent, the Śankarcharyas of Pūrī have played a key role in reversing the damage done by Buddhists as well as Portugese to this place.

Not surprisingly, Jīvdāni Mātā Mandir was re-discovered because of the 7th Śankarcharya of Pūrī, Śrī Svāmī Padmanābha Tīrtha. The story goes as follows. Once when Śankarcharya visited this place, a mahar came to Him and expressed his desire to have darshan of invisible Jīvdāni Mātā, who is his kuladevī. Śankarcharya blessed him and asked him to do go-seva on the Jīvdāni Hill. The mahar followed His instructions very carefully and ultimately indeed got darshan of the Devī . When Devī appeared before him, he with his conversation impresses the Devī. Devī then asks him how he being a mahar has such great knowledge of Varṇa-āśrama-dharmas. The mahar, with humility, says it is all the blessings of Śankarcharya. Devī impressed by mahar, says: “with the puṇya of serving this cow, who is none other than kāmadhenu, you can cross this un-crossable vaitariṇī and attain Mokṣha“. This amazing story throws light on how true followers of Hinduism and Guru’s of Hinduism like Śankarcharya did not discriminate mahars and infact helped them attain Mokṣha itself! On contrary, it is unfortunate that modern activists consider mahars to be of low-caste and victims of social injustice.

This entire episode of mahar getting Mokṣha was witnessed by a barren woman. Impressed by the woman’s stotrams, the Devī blessed her with a child. The barren woman replied saying, she would be happier if the Goddess blessed all barren woman rather than her alone! The Devi then gave a boon that any barren woman who offers beetle nut near my cave will be blessed with children. Thus the ancient cave and the Goddess once again became famous due to Gurus like Śankarcharya and great bhaktas like the mahar and the barren woman.

About the Temple: The temple and murti or vigraha that exist now are recent constructions. The cave temple itself is on a hill and one needs to ascend around 1700 steps to reach the temple. There is rope-way facility intended for elderly people. For young people, the waiting time for rope-way will be more than hill-climbing time. The present cave temple is beautiful with murti or vigrahas of Devi and Shri Krishna in marble. The small passage, where the devi resides in invisible form, can also be seen near the main temple. The temple is visited by a large number of locals and pilgrims from near-by villages. On holidays and holy days, there will be long queues for seeing the Goddess. From the temple, the view of vasai is very beautiful.