Jambavan (Samskrit : जाम्बवान्) or Jambavanta is well known as the wise old minister (a noble bear) of Sugriva, the Vanara Raja who lived on the Kishkinda mountain of Bharatavarsha. He is also known for his fight with Shri Krishna for Syamantakamani (a precious ornament gifted by Surya) described in Bhagavata Purana. Thus his role in Ramayana and Bhagavata Purana is well discussed. There are different versions that Jambavan was described as a monkey and a bear. 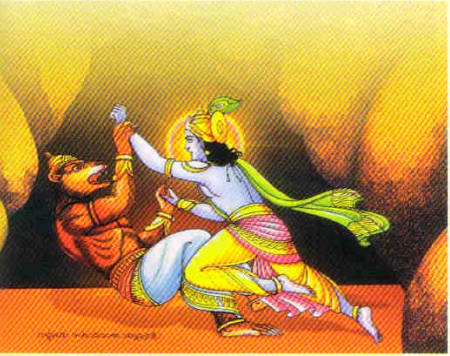 Jambavan fighting with Shrikrishna in a cave.

In Valmiki Ramayana, Jambavan is described as Rksapungava (ऋक्षपुङ्गव: । foremost of bears) who was created from Brahma.

Brahma says - earlier Jambavan, the Rkshapungava, the foremost among bears arose from my face at the instance of my yawning.[1]

Sri Krsna married Jambavati the daughter of Jambavan described in the Samantopakhyana of many texts (Puranas, Mahabharata).

Jambavan, the rksharaja, (moving) with the speed of the mind, proclaimed with beating of drums in all directions, the victory of Mahavishnu (over Bali Chakravarty) and the great festive occasion.[6][1]

In the assembly of monkeys searching for Sita in the southern direction each monkey was discussing their individual capacity to leap across the sea. When asked about his ability Jambavan replied that he went around Mahavisnu, who took the avatar of Trivikrama Vamana to curb the powers of Mahabali. At that time Jambavan was immensely strong. But by the time of the incarnation of Sri Rama his strength had decreased much. Thus in Valmiki Ramayana he quotes his abilities thus,

"My abilities in olden times were not what you see now. In the far old days, I had walked round that Eternal Being Visnu when he measured three steps at the sacrifice of Mahabali. Now, I am very old and have not enough strength to jump over the sea." (Valmiki Ramayana, Kiskindha kanda, Sarga 65).

From this sloka it may be noted that Jambavan existed way before Shri Rama took avataram on the earth.

When the troubles and hardships caused by the wickedness of Ravana became unbearable the goddess Earth and the Devas approached Brahma for redress. Brahma took them to Vaikuntha, where Mahavisnu heard everything and said that he would incarnate as the son of Dasaratha and would kill Ravana. As Mahavishnu took the avatara of Shri Ramachandra, Brahma directed chiefs of Apasara and Gandharvas to create an army of monkeys to help Shri Rama on that occasion. Accordingly Brahma created Jambavan (earlier than Rama's incarnation) and several other monkeys. Distinguished rshis, siddhas, vidyadharas, uragas, charanas procreated heroic sons in the form of monkeys who became forest-dwellers.

Hanuman, Nila, Angada and Jambavan were the formidable troop of monkeys sent by Sugriva in the southern direction in search of Sita. On reaching the southern seas, the question was how to jump over the sea to Lanka. They were previously informed by Sampati that Sita was in the Asoka vana as a captive of Ravanasura. Each of them came forward to show his ability and admitted failure. Finally Jambavan called Hanuman and advised him to jump over to Lanka.

Hanuman who was not aware of his own strength, did not come forward and stayed quiet. Jambavan told him about his birth, strength, attainment of boons etc. Hanuman became convinced of his powers at the words of Jambavan and jumped over the sea to Lanka.

Once due to a curse of sage Trnabindu, Hanuman lost his great strength and vitality. But, the remedy given was that he would regain the lost power when anyone reminded him of it. During the search for Sita Hanuman felt it difficult to jump across the southern sea to Lanka due to the above curse. But, when Jambavan described to him about his noble origin and powers Hanuman regained his lost power and vitality, and successfully jumped across the sea to Lanka.[1]

Sarga 66 of Kishkinda Kanda of Valmiki Ramayana[9] describes the glory of Hanuman by Jambavan and how he inspires Hanuman to take the leap over the ocean to reach Lanka. This also shows the skill, knowledge and wisdom of the old minister of Sugriva.

Many Puranic texts have mentioned about Jambavan being seen in Dvapara Yuga, in connection with the precious stone Syamantaka. This upakhyana (anecdote) during the avatara of Shri Krishna is famous because Jambavan gives his daughter Jambavati as the wife of Shri Krishna. Jambavan is one among the chiranjeevi's (a long lived being) is evident in this story.

The Sun-god gave this jewel Syamantaka to King Satrajit. Syamantaka mani gives gold to the owner and protects against any disease. His younger brother Prasena wore it and went to the forest for hunting. A lion killed him and took the jewel in his mouth and was going along the forest when Jambavan killed it and took the jewel. It was rumoured that Sri Krsna had killed Prasena and taken the jewel. This story is recited in many households across Bharatavarsha as a part of the vratakalpa in Vinayaka Chaturthi festival puja. It is said that reciting it dispels the false implications by anyone as given in the phalasruti. 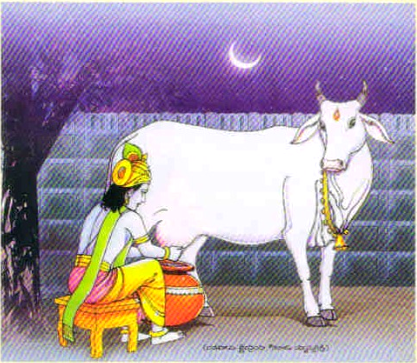 Shrikrishna milking the cow on the night of Bhadrapada Chaviti day when he sees the reflection of Chandra in the milk.

So to clear himself of the false charges Shri Krsna went in search of the jewel to the forest, and found the body of Prasena and his horse. Seeing the footprints he found that a lion had killed them. A few steps away he found the body of the lion and that a bear's prints. Following the footprints Shri Krishna arrives at the mountain cave of Jambavan. Inside the cave a small boy was being consoled saying "Don't cry, here is Syamantaka mani". Understanding that bear killed and took the jewel from the lion, Shri Krishna fights with Jambavan for 21 days (another version is 27 days), and defeats him. In the duel that ensued between Jambavan and Krsna the former was defeated. He recognised Krsna to be the Lord, and presented Syamantaka and also his daughter JambavatI to Krsna and JambavatI thus became Krsna's wife. (Page 425, Puranic Encyclopedia)[1]. Accepting defeat Jambavan offers the Syamantaka mani along with his daughter Jambavati in marriage to Shri Krishna. Upon return with his retinue to Dwaraka, Shri Krishna returned the mani to Satrajit and clears false accusations on him. Satrajit offers his daughter Satyabhama to Shri Krisna on knowing the true events. (Bhagavata, Skandha 10).

From the story of Prasena it may be seen that Jambavan left Kiskindha and lived in the cave of Rkshavan with his sons and other relations.

Samba is the son of Jambavati through Shri Krishna and is well known for bringing about the end of Yadava race. The sages Visvamitra, Kanva and Narada came to Dvaraka once. Some Yadavas brought Samba dressed as a pregnant woman before the sages and asked them derisively what child, whether male or female, would Samba give birth to. Angry at this insult, the sages said that the 'pregnant woman' would deliver an iron rod, which would become instrumental for the destruction of the Yadava dynasty. (Page 428 of Puranic Encyclopedia)[1]