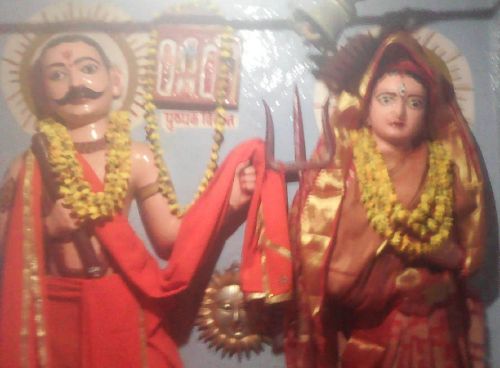 Raja Harishchandra (सत्यहरिश्चन्द्रः) was the son of Raja Trishanku, belonging to the Suryavamsha or Ikshvaku dynasty.[1]

During a hunt in the forest, Raja Harishchandra once promised to help a brahmana with money for his son’s wedding. The brahmana, who was Vishwamitra in disguise, eventually came to Ayodhya and asked for the Raja's entire kingdom, horses, elephants, treasury, everything. The Raja was helpless and had to give up everything.

Not satisfied with this, Vishwamitra then asked for 2 and 1/2 measures (Éar) of gold as dakshina. Harishchandra sought some time and left for Kashi with his wife and son. Vishwamitra hounded him there, and demanded the dakshina again. Harishchandra’s wife offered to sell herself as a servant to get the money for the dakshina. The son was also sold along with her.

However, the proceeds were still not sufficient for the dakshina. Therefore, Harishchandra sold himself to a Chandala, to tend to the funeral pyres. He then finally concluded the dana transaction with the proceeds![2]

Markandeya Purana details the story of Satyavaadi Raja Harishchandra. One day, while hunting in a forest, he heard a woman cry for help. He could not figure out where she was and started calling out for her. This disturbed the penance of sage Vishwamitra. He was angry and wanted to know why he was disturbing his penance.[citation needed]

Harishchandra introduced himself as a king who was very benevolent and generous. He requested sage Vishwamitra to ask for some charity from him. Vishwamitra said that he planned to conduct a yajna and that Harishchandra could give him gold for the purpose of giving dakshina to yajna-purohitas. The king said this was very less and insisted that he ask for more. So, Vishwamitra asked for whole of his kingdom including people, animals, treasury and army. When these were given, Harishchandra became destitute. He had to leave his kingdom. He was not able to give the promised gold dakshina to Vishwamitra. Since he had already given his word, he asked for a month's time to fulfill his promise to which Vishwamitra agreed.

At that time, the head of the crematorium was looking for an assistant. Harishchandra mortgaged himself too and gave the remaining amount to Vishwamitra. He started working at what is known today as Harischandra Ghat in Kashi. While doing daily chores for the brahmana, his wife and son always hoped that he would earn sufficient wealth and would one day come and free them from bondage. But Harishchandra was not able to save any money. And, the Devatas decided to increase the heat in their test.

One day, his son, Lohita died. His wife brought the body of the boy to the cremation ghat. Both their physical appearances had changed so much that each could not identify the other. While his wife was wailing in front of the dead child, Harishchandra was dutifully making arrangements for cremation. The mother regretfully cried that the son of great King Harischandra was going to be consigned to flames without chanting of mantras and final rites. As soon as he heard his name being called out, he remembered everything and they both decided to enter the pyre after cremating their son. Being extremely honest and truthful, he asked his wife to wait for the owner to return, so that he could seek permission of the owner before giving up his body to the flames.

While they thus waited in grief, sage Vishwamitra and the Devatas appeared before him and gave life back to his son. He was reinstated as the King and was given back everything. He had passed the ultimate test of truthfulness. He has since been known as Satya Harishchandra throughout the three worlds.