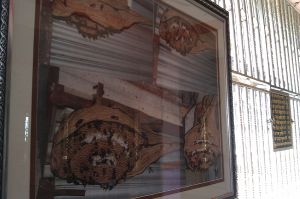 About the Temple: Though the Goddesses here are svayambhu, the temple structures are renovated and are fairly new. The three Goddesses appear on a rock of a hill inside a cave. One needs to ascend around 200 steps in order to reach this cave temple. It is very interesting that the honey bees here, many times, naturally construct their honey combs in the form of Śiva liṅga (see picture on left). Perhaps even the bees know that the place is sacred!