Vyakarana (Samskrit: व्याकरणम्) roughly translated as grammar, one of the important topics in the shad vedangas, is the foundation of language and communication in the evolutionary history of human beings. In the tradition of vyakarana, one can see the origin of analysis tracing back to Vedas. There are innumerable references to language elements, structure and nature in classical literature. Evidence shows that the terminology used for language analysis has its origin in the Vedas.[1] Speech (Vak) and its meaning (Artha) are the intimately related units most essential in language and communication. The union of Vak and its Artha are primordial just as the parents of the Universe, Parvati and Parameshvara, as beautifully weaved in the salutations of Mahakavi Kalidasa in Raghuvamsha mahakavya. 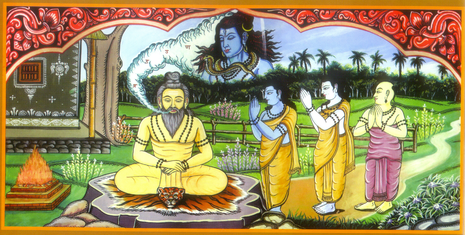 The philosophy of language evolved by the schools of Vyakarana and Mimasa, is the outcome of elaboration of the suggestions found in the Vedas. The divine nature of speech, the creative and illuminative power of the word and the different levels of speech are the main doctrines which formed the philosophy of language in Bharatiya shastras. Of the six vedangas, the ancillary disciplines of the Vedas, Siksha (pronunciation), Vyakarana (grammar) and Nirukta are directly connected with the Vedas. The major contributors to the language and its understanding are the Vaiyakaranas who developed many theories about language understanding.

Every system of thought and the various darshana schools had to consider language at some stage or other and each one had given attention to the ultimate question concerning the relation between the word and reality. Language had both outer empirical and inner metaphysical dimensions. Panini and Patanjali while elaborating on technical and grammatical aspects of human speech also discussed the divine nature of Vak (वाक्) and the metaphysical qualities of language. Shabda has been directly identified with the language of Vedas as Shabda Brahman and the divine Vak has been considered as the seed of creation. Bharatiya Vyakarana shastra brings one to a unique inquiry of the seers who advocated that shabdas which fall within the limits of vyakarana rules only should be employed for that would fetch dharma to the individual. Thus use and abuse of language came into the precincts of vyakarana.[1]

While it is possible to transform the meaning from the speaker to the listener through both śabdas and apaśabdas, vyākaraṇam prescribes that one should employ śabdas only. Here the term śabdas refers to sādhuśabdas (perfect śabdas that are acceptable to vyākaraṇa). Patanjali used the term śabdānuśāsanam as a synonym of vyākaraṇam.[1]

Origin and History of Vyakarana

It is indisputable that language and literature of Bharatavarsha began with the Vedas. Five rk mantras have been chosen and discussed in relation to vyakarana, by Patanjali in the Paspashnika of his Mahabhashya.

Gopathabrahmana of Atharvaveda mentions many terms that we use in vyakarana even today.

As far as the Sanskrit language is concerned, śabdas are put under two headings viz. vaidikaśabdas and laukikaśabdas. The śabdas that are available in four vedas (roughly 1137 branches) are called vaidikaśabdas. Prātiśākhyas are the works that deal with the grammar of vaidikaśabdas. Each veda has separate prātiśākhyas.

Vyākaraṇam is the system that deals with the linguistic analysis of laukikaśabdas. Indra, Candra, Kāśakṛtsna, Śākaṭāyana etc., were the authors of different vyākaraṇas, earlier to Pāṇini, some of them might have been his contemporaries. Upavedas, purāṇas, vedāṅgas, kāvyas etc., fall under the range of laukikaśabdas. This was the situation prior to Pāṇini.[1]