Thiru Vellarai, also known as Shvetagiri Kshetra is one of the 108 Vaishnava temples. A teertha that claims to be older than Srirangam (one of the foremost of the Vaishnava kshetras), the temple itself and its deities are praised in innumerable works of many great saint poets.[1] 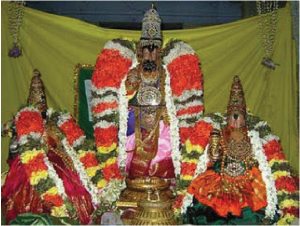 Thiru Vellarai is located at a distance of 21 kms from Tiruchirapalli and the temple stands on an isolated rock surrounded by massive walls. It is a famous seat of Vaishnava Sampradaya where Ramanuja is said to have spent as many as 12 years of his life. The kshetra is also called Adiranga kshetra (the one preceding Srirangam). And is the birthplace of Uyyakkondar (Disciple of Nathamuni) and Engal azhvan (Disciple of Sri Ramanuja).[1]

The temple of Thiru Vellarai with its unique architecture is known for its massiveness and elegance. Situated on a high peak, this temple reveals the constructive genius of several dynasties. Prof S. Narayanan says,

'The huge temple with its beautiful elevation is an excellent example of synthesized art and architecture of several dynasties'.

The synthesis of various styles ultimately evolving into one local style is one of the remarkable features of this temple's architecture. This is reflected in its double-walled pillars, cluster of brackets, open expanse, high parapets and pavilions built by masons. This way, the temple is a projection of harmony, simplicity and piety.

This reputed teertha spreads over 40 acres of land surrounded by a lofty line of mountains and block of granite hills. It is rich in tradition as well as of great antiquity. Built of chiseled red stone, with very thick and tall walls strengthened at short distances by massive structures and imposing mandapas, the temple resembles an impregnable fortress. It is its proportion, elegance and natural beauty that make this shrine a celebrated temple of ancient India.

The svastika shaped pushkarini behind this Vishnu temple is a unique piece of architecture built by Kamban Arayan. The tank has fifty two steps leading from all the sides. The first 18 steps remind one of the 18 chapters of Bhagavad Gita, the next 4 steps are symbolic of the four Vedas, followed by 5 steps reminding one of the Panchabhutas. After crossing the Bali pitha and Dvaja sthambha, one has to climb 8 steps reminding one of the Ashtakshara mantra (Om namo narayanaya). And, the final 24 steps are symbolic of 24 aksharas of Gayatri mantra. Thus, there are 59 steps leading one to the Garbhagrha. In fact, the bathing ghat is so well designed that it gives privacy to the bathing pilgrims.

There are two entrances to this temple. One is the Uttarayana gate which is kept open between January and July and the other one is Dakshinayana gate which is kept open between July and January. This is based on the practice followed at Vaikunta. There is yet another gate known as Nazhi Kettan Vasal. It was at this Vasal (door) that Bhagavan Vishnu was questioned by Lakshmi Devi for returning late at night. It is said that, one day Vishnu returned late after his customary rounds in the village. Devi in her misgiving queried Vishnu about his late return. And therefore, the name Nazhi Kettan Vasal (ie. the gate where Vishnu was asked time).[1]

Mahavishnu in this temple is revered as Pundarikaksha. He is depicted in a standing posture (Nindra tirukolam) facing the east. He is in the company of Aniruddha and Pradyumna. While, Lakshmi is enshrined separately and is worshipped as Senkamalavalli and Pankajaselvi. Periya alwar glorified the deity here are Balakrishna and called him Jnana Sudar ( ie. the flame of wisdom), Tirumangai alwar eulogized him as Sveta Hayagriva while, Sri Vedanta Desika refers to this deity as Svayam Prakasha (self-effulgent).[1]

This Divya Desha is sanctified with very many inspiring stories thereby attracting pilgrims since times immemorial. It is said that Vishnu in this kshetra gave darshana to Raja Sibi, Garuda, Bhu devi, Markandeya Maharshi and several other celestials. The earliest reference to Thiru Vellarai is found in the Brahmanda Purana and the Padma Purana. Some of the legends in connection with this temple are enumerated below: