Difference between revisions of "Shiksha (शिक्षा)"

Shiksha (Samskrit: शिक्षा) means "instruction, lesson, learning, study of skill". Shiksha is a knowledge of pronunciation and accent, insufficiently expressed as phonetics.[1] In this context it refers to one of the six Vedangas, or limbs of Vedic studies, others being Vyākaraṇam (Grammar), Chandas (Prosody), Niruktam (Semantics and Thesaurus), Jyotiṣam (Astrology) and Kalpa (Practice of Rites). It has an important place in the Vidyasthanas and hence study of this shastra is a prerequisite for Vyakarana. 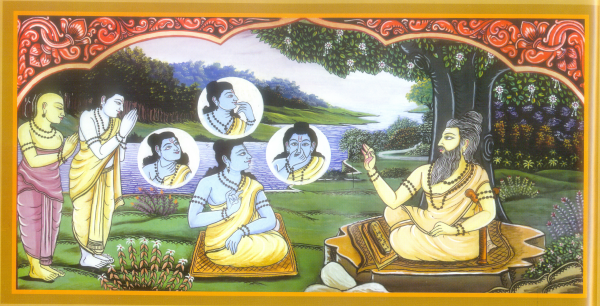 Shiksha is considered as the nose (घ्राणम् - ghrāṇam) of Vedapuruṣa (knowledge personified). Unlike other later day languages, pronunciation is of utmost importance in Samskrit. Different speech organs, places for different letters, the efforts, the accents, quantity, pitch, stress, melody, process of how letters are produced, the virtues and vices of pronunciation, the problem with mis-pronunciation etc. are discussed in this Vedanga.

Each ancient vaidika parampara which sustained over ages must have developed pronunciation and the earliest surviving texts which deal with some aspects of pronunciation are the Pratishakyas. The Paniniya-Siksa and Naradiya-Siksa are examples of extant ancient manuscripts of this field of Vedic studies.

Shiksha is the oldest and the first auxiliary discipline to the Vedas, maintained since the Vedic era. It aimed at construction of sound and language for synthesis of ideas, in contrast to grammarians who developed rules for language deconstruction and understanding of ideas. This field helped preserve the Vedas and the Upanishads as the canons of Hinduism since the ancient times, and shared by various Hindu traditions.

Om! We will explain the Shiksha. Sounds and accentuation, Quantity (of vowels) and the expression (of consonants), Balancing (Saman) and connection (of sounds), So much about the study of Shiksha -1

Shiksha, states Hartmut Scharfe, was the first branch of linguistics to develop as an independent Vedic field of study among the Vedangas.[4] This is likely because Vedas were transmitted from one generation to the next by oral tradition, and the preservation and the techniques of preservation depended on phonetics.

The earliest Brahmanas – a layer of text within the Vedas, include some terms of art in the Vedic phonetics, such as Varna and Avasana. The Shiksha field was likely well developed by the time Aranyakas and Upanishads layer of the Vedas were being composed.[4] The alphabet had been categorized by this time, into vowels (svara), stops (sparsa), semivowels (antastha) and spirants (usman).[4] The field was fundamental to the ancient study of linguistics, and it developed as an interest and inquiry into sounds rather than letters.[4] Shiksha, as described in these ancient texts, had six chapters - varna (sound), svara (accent), matra (quantity), bala (strength, articulation), saman(recital) and samtana (connection between preceding and following sounds).[4]

The insights from this field, states Scharfe, "without doubt was applied by Vedic scholars to the art of writing". It also impacted the development of Indic scripts and evolution of language in countries that sought Indian texts or were influenced by Indian religions.[4] According to Scharfe, and other scholars, the insights developed in this field, over time, likely also influenced phonetic scripts in parts of East Asia, as well as Arabic grammarian Halil in 8th-century CE.[5][6]

The Shiksha field of Vedic studies arranged the Sanskrit alphabet in a rational order, state Wilke and Moebus, each mapped to the anatomical nature of human sounds, from the back to the front - throat (at the very back), palate, palatal ridge, teeth and lips.Template:Sfn

The letters of the Sanskrit alphabet were further organized by the Vedic scholars into a magic square, making symmetrical and resonant alternate readings of the letters possible, such as top to bottom in addition to left to right.Template:Sfn Further, the Shiksha scholars added Mudra (hand signs) to go with each sound, thereby providing a visual confirmation and an alternate means to check the reading integrity by the audience, in addition to the audible means.Template:Sfn

These Mudras continue to be part of the classical Indian dance tradition.Template:Sfn In Sanskrit, the posture of the performer is an added dimension to those of pronunciation and gesture, together these empowered muscular memory with acoustic memory in the Hindu tradition of remembering and transmitting Sanskrit texts from one generation to the next, state Wilke and Moebus.Template:Sfn

The methodical phonetic procedure developed by Shiksha helped preserve the Vedas without the slightest variants in the most faithful way possible.Template:Sfn It made the Vedas and embedded Principal Upanishads the canonical scriptures of Hinduism. The rules and symmetric of Siksa helped the student to master enormous volumes of knowledge, and use the embedded codes and rules to self check his memory.Template:SfnThe reciter's mind and body are engaged, making language and sound as an emotional performance.Template:Sfn The study of phonetics functioned to transform a Vedic text, which traditionally was composed as language-music, into a musical performance.Template:Sfn Individual sounds in the Sanskrit have independent personalities, and the reciter helps develop their character and their timbre, state Wilke and Moebus. Naradiya Siksa, a phonetics treatise on the Sama Veda explains this aspects of phonology with various similes, such as,

Just as a tigress takes her cubs tightly in her teeth without hurting them, whilst fearing that she might drop them and injure them, so one should approach the individual syllables.

Pratisakhyas are the oldest Siksa textbooks of each branch of the Vedas.Template:Sfn Later Siksa texts are more specialized and systematic, and often titled with suffix "Siksa", such as the Naradiya-Siksa, Vyasa-Siksa, Pari-Siksa and Sarvasammata-Siksa.Template:Sfn

The Pratishakhyas, which evolved from the more ancient Vedic Texts padapathas (padapāṭha), deal with the manner in which the Vedas are to be enunciated. There are separate Pratishakhyas for each Veda. They complement the books called Shiksha written by various authorities. Several Pratishakhyas have survived into the modern era, and these texts refine the structure of sound at different levels of nuance, some adding many more letters to the basic set in the Sanskrit alphabet:[7]

The Shiksha Texts and the Pratishakhyas led to great clarity in understanding the surface structure of language. For clarity of pronunciation, they broke up the large Vedic compounds into word stems, prefixes, and suffixes. Certain styles of recitation (pāṭha), such as the jaṭāpāṭha, involved switching syllables, repeating the last word of a line at the beginning of the next, and other permutations. In the process, a considerable amount of morphology is discussed, particularly regarding the combination of sequential sounds, which leads to the modalities of sandhi. The Samaveda Pratishakhya, one of the earliest, organizes the stop consonant sounds into a 5x5 varga or square:

The alphabet is designed such that the difference between sounds is preserved whether you recite it horizontally or vertically. It was extended and completed with fricatives and sibilants, semi-vowels, and vowels, and was eventually codified into the Brahmi alphabet, which is one of the most systematic sound-to-writing mappings. Scholar Frits Staal has commented, "Like Mendelejev’s Periodic System of Elements, the varga system was the result of centuries of analysis. In the course of that development the basic concepts of phonology were discovered and defined.[9]

The Varga system and the Pratishakshyas, contributions of the Shiksha texts, are elaborate systems which deal with the generation and classification of sound.

Although many of these Shiksha texts are attached to specific Vedic schools, others are later day texts.

Traditionally syllables (not letters) in Sanskrit are called Akshara, meaning "imperishable (entity)": "atoms" of speech, as it were. These aksharas are classified mainly into two types:[10]

Svara aksharas are also known as prana akshara; i.e., they are main sounds in speech, without which speech is not possible. Pāṇini referred to svara as ac pratyahara. Later they became known as ac Akshara.

Vyanjana means embellishment, i.e., consonants are used as embellishment in order to yield sonorant vowels. They are also known as Prani akshara; that is, they are like a body to which life (svara) is added. Pāṇini's name for vyanjana was Hal Pratyahara, which were later referred to as Hal akshara.

It was said[who?] that in Sanskrit a vowel can be pronounced in 18 ways (3×2×3), based on timing, manner, and accent of pronunciation.[citation needed]

Each vowel can be classified into three types based on the duration of pronunciation (morae):

We see that each vowel can be pronounced in three ways according to the duration of articulation. ×. The unit of time is a mātra (approx. 0.4 seconds).

Each vowel can be further classified into two types based on the manner of pronunciation:

Each vowel can also be classified into three types, that is, pronounced in three ways, based on accent of articulation. This feature was lost in Classical Sanskrit, but used in reciting Vedic and Upanishadic hymns and mantras.[citation needed]

But according to Indian linguistic tradition,[11] there are five passive places of articulation:

Apart from that, other articulations are combinations of the above five places:[citation needed]

There are three active places of articulation:

Effort (or manner) of articulation (Uccāraṇa Prayatna) is of two types for consonants,[citation needed]