Kalpa (Samskrit : कल्पः) not to be confused with Kalpas defined by Kala pramana (time) is a part of the Shad Vedangas. They are called as Sutra Charanas consisting of a group of texts that relate specifically to aspects of conduct of Vedic or Shrauta yajnas, the Grhya yajnas, samskaras, the agni or fire involved in these activities, their procedural explanations, yajna vedi measurements involved and associated dharmas both for individual and society at large. 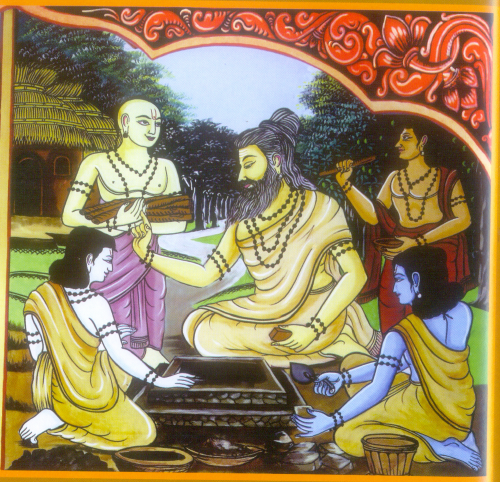 In this section we cover a few important aspects about the kalpasutras.

Unlike the Brahmanas, the Kalpasutras are not included in the Shrutis and bear the names of human authors with the rare exception of Vishnu Dharmasutra claiming divine authorship. A large number of Kalpasutras belonging to all the Vedas are now extinct, and that only a small fraction of rich cultural heritage has come down to us in the form of the extant Kalpasutras.

There was no sacred injunction that a Sutrakara must compose all types of sutras, and that every Sutra charana must have an associated Dharmasutra. One sutra charana was independent of the other sutracharanas or granthas, though they borrowed some rules from other charanas. So far as the rules on Grhya topics, such as marriage and Upanayana were concerned they could depend upon the Grhyasutras. And the rules on other topics such as occupations of varnas, duties of kings, administration etc, which were within the purview of Dharmasutras were equally applicable to all the Sutra Charanas and thus unfettered by any individual vedashaka. It was therefore, not necessary that each Sutra charana must possess a Dharmasutra of its own. Thus it can be safely said that so far as the broad principles of Dharma were concerned, the Dharmasutras did not depend on any particular Veda and drew upon all the Vedas and Brahmanas without any distinction. But in the case of domestic activities or Grhya rites and customs, the Sutrakaras or authors adhered to their own traditions; and they were naturally inclined to accord the first preference to those rites and traditions in which they were brought up in. Thus the Grhyasutras reflect the particular activities of those Veda shakas in ancient times.[5]

Kalpa Vedanga deals with four types of Sutra Charanas or granthas, all closely allied and complementary to each other. They are

Some of these four types of texts belonging to the same school were composed by one and the same author in some cases. All the Vedas possess their distinct Kalpasutras, their number being the largest for Yajurveda and the smallest being two for Atharvaveda. The kalpasutras belonging to the Yajurveda are complete (with all the four sutragranthas) whereas those belonging to other Vedas are deficient in one or the other type of Sutras.[1][6][7]

Comparison of the Sutra Charanas

Here below are a few distinctions between Shrauta, Grhya and Dharmasutras. The Sulbasutras are considered more as manuals for measurements and setting up altars thus their subject matter is completely different, hence is not listed in this table.

Undeniably the primary differentiating feature of the Dharmasutras from the Grhyasutras is that they cover a wider range of subjects which are by no means confined to the limits of any particular veda shaka to which the sutras belong to. Moreover, the outlook of the Grhyasutras is limited to the customs and conventions of their respective schools confining themselves principally to the various events of domestic life.[1][8]

Grhyasutras include the following topics which are elaborate in the Dharmasutras : Domestic fire, Grhyayajnas, yajnas involving cooked food, marriage, pumsavana, jatakarma, upanayana and other samskaras, rules for students, snatakas and anadhyayana, shraddha and offerings, madhuparka. Dharmasutras also contain rules on some of the above topics such as marriage and samskaras, Brahmacharya, snataka etc. While both of them contain similar topics, for example, duties of a Brahmachari are meagerly dealt with in grhyasutras as compared with the corresponding dharmasutra. Some sutras are common to both grhya and dharmasutras. Again there are points of difference between the dharmasutras and Smrtigranthas such as Yajnavalkya smrti and Manusmrti which will be discussed in Smrtis.[8]

Measurements were based on the performer and not standardized. The Shrauta yajnas involve vedis or kundas into which the tretagnis are kindled. They are in simple circular, semi-circular and rectangular shapes. These examples show that the purpose for which the geometry got developed in the context of construction and transformation of planar figures. These texts shed light from the viewpoint of development of mathematics in the antiquity, particularly the use of arithmetic, algebra besides geometry. The different chitis not only speak of aesthetic sense, but also of creativity and ingenuity of the authors of Sulbasutras to work with several constraints both in terms of area and volume.[9]