Bhaaratavarsha (Samksrit : भारतवर्षम्) is the term used to denote the regions ruled by Chakravarthi Bharata and his descendants. Some state the decendents of Bharata include the descendants of Maharshi Bharadvaja also. This territory roughly coincides with the territories of modern day India and adjacent territories that have been lost to invaders. Several maps depict Bharatavarsha (Ancient India or Epic India) which help locate the probable locations of villages, cities, pilgrim places, rivers, lakes, forests, mountains and kingdoms of ancient India.

Of these (sons) the eldest was a mahayogi, called Bharata who was endowed with highly excellent attributes. It is on account of him that this varsha (continent) came to be called Bhaaratavarsha.[6]

Bharatavarsha was also the domain of visionary sages (Rishis) and not just an empire of kings. Hence it is rightly called Arsha-Bhaarata, the Bhaarata of the Rishis (sages). The unity of this nation was envisaged by its sages who saw its past and its future in the tranquility of their mind, ever fixed in Dhyana (meditation) and Yoga. Their level of understanding was higher than that of the average men and women. Maharshis like Angirasa, Agastya, Vasistha, Vishvamitra, Bharadvaja, Gautama, Agnivesha, Lomasha, Markandeya, Vyasa, Valmiki, Shaunaka and Yajnavalkya traveled throughout the Bharatavarsha, uniting its people. 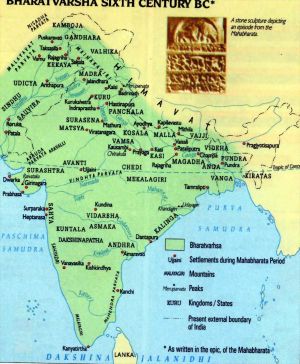 The name Mahabharata is synonymous with Bharatavarsha. Geographically the word 'Mahabhaarata', 'the Great Empire of Bharata' is same as the word 'Bhaaratavarsha'. Politically the word 'Mahabharata' is same as the nation united under the geographical entity called Bharatavarsha with all its cultural diversity. Thus Mahabharata is Bharatavarsha! In his work called Jaya which later grew into Mahabharata, Vyasa had dedicated several chapters to describe the geography of Bharatavarsha describing its rivers, mountains, forests and lakes that existed during his lifetime. In several chapters he describes the political entities and tribal populations that existed in Bharatavarsha. He also described its people and their kings in several chapters of his work. In describing the circuitous pilgrimage journeys of Arjuna and later Yudhisthira and in describing the journeys of Yudhisthira's brothers into four cardinal directions for Rajasuya, Vyasa has united the East, South, West and North of India. 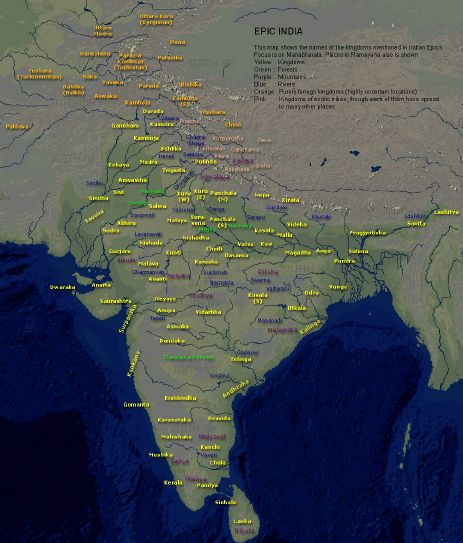