It is located at Malabar Hill, near Chowpati beach, Mumbai. 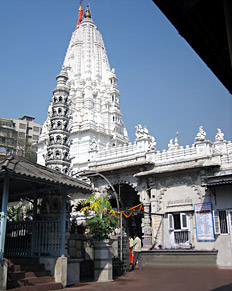 Kṣhetra Purāṇam: Around two hundred years ago there lived a rich and modest goldsmith by name Pāṇḍurang, who owned the portion of the Malabar hill on which the temple is now located. For Indians of ancient and medieval ages, cows were very sacred and every gṛuhastha used to have a cow. Pāṇḍurang, being rich, had many cows and employed a bābul (care-taker) for them. Bābul used to take the cows for grazing to the very location of the current temple. While this was the routine, once Pāṇḍurang observed that one of the Kapila cows (brown-coloured) was not giving milk. On inquiring, Bābul said that since few days, the Kapila cow stops at a particular place on the hill while grazing and by itself delivers milk. Thus by end of day no milk was left with her. Surprised by Bābul‘s words, Pāṇḍurang inspected the Kapila cow’s changed routine himself. He was awe-struck to see the cow delivering milk by itself. On a little excavation, a Śiva lingam was found at this very place. This is the swayambhū lingam which is now worshipped as Bābulnāth.

About the Temple: This majestic and spacious temple structure was built by Pāṇḍurang in 1780. There are beautiful murti or vigrahas of Lord Śiva and other deities on the temple walls. The most attractive is that of Śiva–parivār, where Lord Śiva appears as a vṛuddha (old man), depicting that He is ancient (He is a sanātana). There are small temples of Ganeśa and Hanumān in the temple premises. One has to climb around 100 steps in order to reach the main temple. An elevator arrangement is made for the elderly pilgrims. The temple is very famous and is visited by many all throughout the year. There is extremely huge rush on the day of Mahāśivarātri.